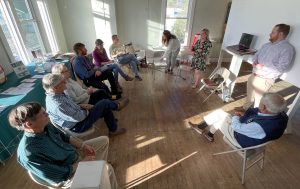 Northern Insuring,  was founded and originally opened in Au Sable Forks in the 1920’s and 1930’s.  Collin McCullough gave an oral history supplemented with a PowerPoint/video presentation.  The years when JJ Rogers iron works and subsequent paper mill was the hub gave rise to many other businesses.  Several car dealers in the region needed financing available for customers so the Au Sable Credit Corporation was formed. In order to provide financing an insurance rider was needed.  There were four men who put an insurance company together; Walter Hildredth, I.C. Cahoun, Frank Kemp and Don Cameron. Frank Kemp died after the first year and his position was taken over by Don Cameron.  By 1930 the Au Sable Credit Corporation dissolved. 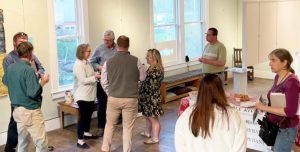 Plattsburgh.  All the smaller offices had been similarly consolidated into the current 3 main offices of Plattsburgh, Glen Falls and Potsdam with a total of 38 employees. Northern Insurance policies are 80% business and 20% personal. Personal insurance also includes home and auto policies. 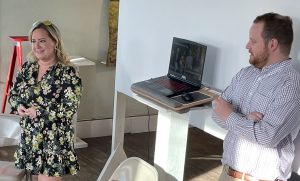 Sales. He is the chairmen of the ADK Foundation Community Council.  Collin is a 46er, snowboarder and fly fisher.  He is an advocate for the Adirondacks and an ARVBA member.  Collin and his fiancé Lauren will be getting married in September.  The presentation also included many interesting accounts from Collins grandfather Rod Glitz.  Collin is a fourth generation employee of Northern Insuring.  His great grand  father E. Glenn Glitz was the first generation, Rod Glitz was 2nd and Rod’s daughter Deanna McCullough (Collins mother) and son Randy Glitz are third making Collin the fourth.  Collin did not go directly into the insurance business and he had left the area for other pursuits such as selling snowboards and hard cider.  His love for the region brought him back to the area and he was encouraged to try the family business.  It has ended up being a good fit and he has a great affinity for helping people.