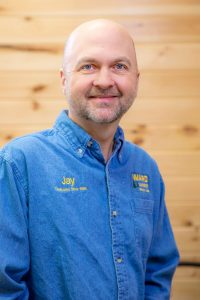 Jay Ward grew up in Jay, NY, attended AuSable Valley Central School and received a degree in Computer Science/Business from Utica College. After a career in college admissions as the Assistant Director of Admissions at Utica College, Ward returned to the Adirondacks in 1988.

Ward was the President and 4th generation owner of Ward Lumber until March of 2021. At that time Ward realized a long term vision of transitioning his 130 year old company to employee ownership through a worker-owned cooperative (not an ESOP).

Ward Lumber is a successful two-unit lumber yard, hardware and paint store operation located in the Adirondack Mountains and North Country of NY state. The company is now directly owned by more than 40 of the 50 employee team members. Jay is working for the employee team as the CEO and reports to the worker-owned cooperative board of directors made up of employee owners.

Jay is passionate about sharing the Ward Lumber worker-owned transition story and information about the simpler, less expensive and attainable worker-owned cooperative model as a way to offer transition options to other small business owners with the goal of retaining independent businesses and jobs on main streets and in rural areas across the US. Ward sees the 1% as being in control of too much of our world and this is his push to give the 99% the opportunity to be in charge of their own destiny and build wealth while caring for the customers and communities in which they live and work.

Ward has been married to Julie for over 30 years and they have two young adult daughters.