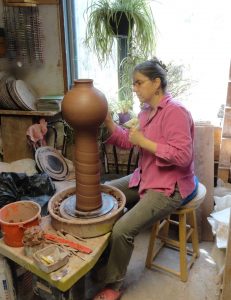 Sue Burdick Young is from Jay, attended Au Sable Valley Central School and has been working professionally as a potter since 1982. She studied at SUNY Potsdam finishing with a BFA majoring in studio art/pottery. Her work has won regional and national recognition . It can be found in collections around the world and in her own showroom/store at Young’s Studio and Gallery. Her studio is the former mechanic garage that her father Meredith Burdick built in the early 1950’s where he sold and repaired chain saws, tractors and lawnmowers through the 1980’s.

Sue has worked as a visiting artist in every school district in both Clinton and Essex Counties. Her most recent community art projects are the 2017-2021 Read and Grow: Dream Garden Mural on the Plattsburgh Public Library and the Mountain Lake Mandala on City Hall Place sponsored by Mountain Lake PBS in 2015. The mandala mosaic is located on Durkee St. in Plattsburgh NY and was featured in the Emmy award winning PBS documentary “Arts in Exile”. Other mosaic murals are located at Peru Intermediate School, Keene Valley Central School, Elizabethtown School and the Clinton County Government Center in Plattsburgh.

Other projects Sue has been involved with are Raku workshops, local studio tour organizing and a year as a comic strip illustrator (under an alias) for a local Adirondack publication. In 2020 during COVID shut downs Sue and a small group of volunteers obtained grant and local funds to provide art supplies and guided projects (Art and Discovery Kits for Kids) for 250 local elementary school children.

It is important to Sue to represent the rich artistic community in the ARVBA region. Sue and husband Terrance Young have two daughters and one grandson.