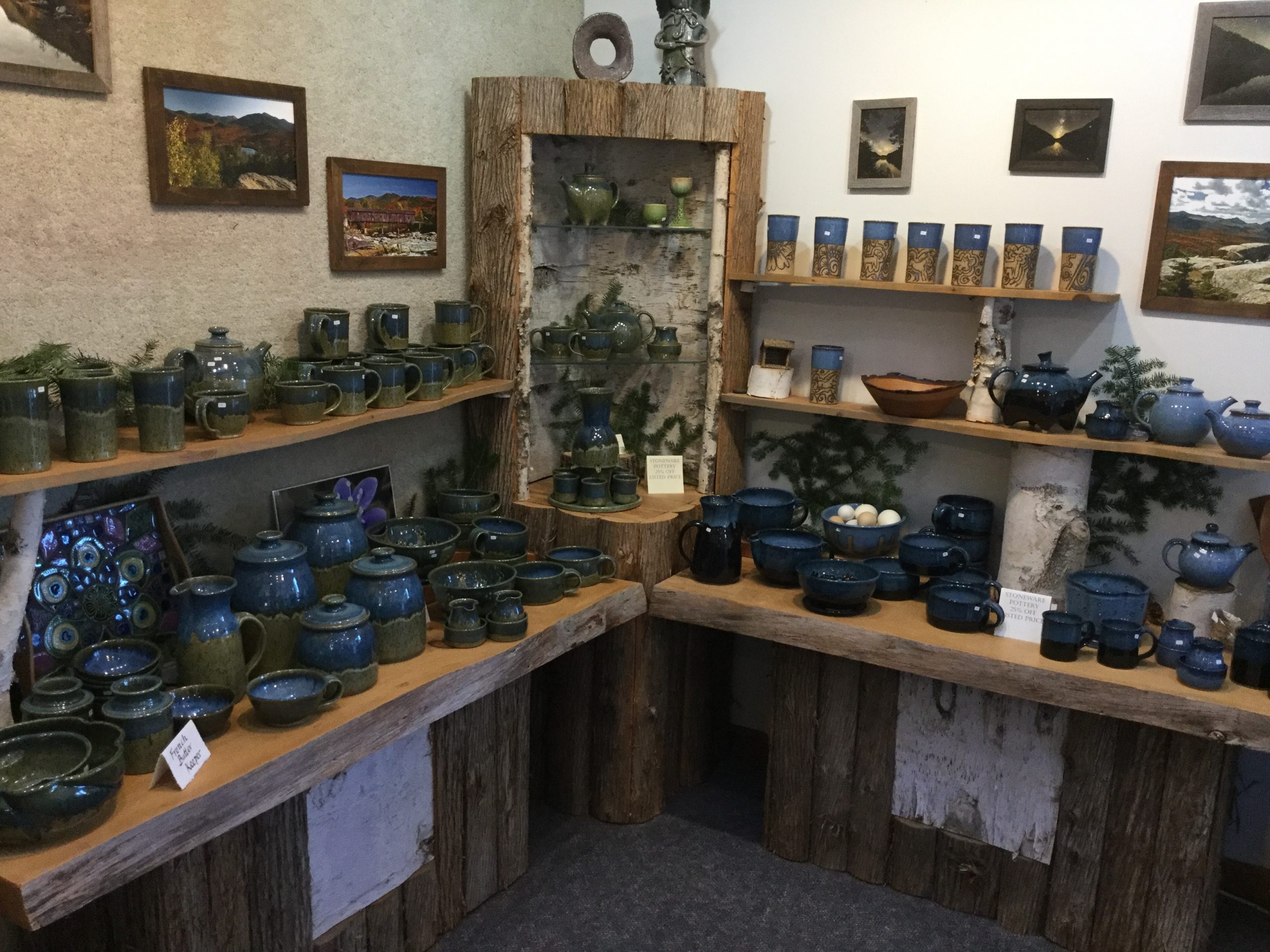 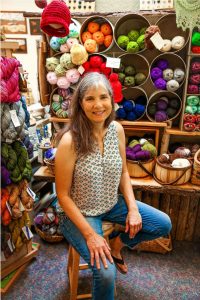 Sue Young started full time as a potter under the name of Su-ramics on April 1st, 1982, after having studied at SUNY Potsdam with a bachelor’s degree in Studio Art/concentration pottery. In June of 1983 she and artist husband Terrance Young merged businesses into their first storefront as Handwork and a few years later (1984) became Young’s Studio & Gallery at which time they bought the property. In 1995 they built the current 780 square ft storefront in conjunction to their studios and home. Over the years they have featured Sue’s pottery and Terry’s oil paintings, etchings, book arts and silk painting as well as work by others. Currently they also feature jewelry, fiber arts, woodwork, photography, books, and music by 28 local artisans. A year ago, YSG started to also carry natural fiber fine yarns both locally produced and international.

Through the years YSG has hosted gallery shows, artist parties, group meditations, group drumming, a marketing seminar in the late 90’s, performances and performance art and memorials. For the business showcase Sue had broken down the business history into four areas which are community involvement, awards and recognition, marketing, and promotion/education. Because of the unique nature of arts as a lifestyle and business, some of these areas overlap. The focus of this showcase was the history of Young’s Studio & Gallery marketing strategies.

When Sue met Terry in the summer of 1981 she had just graduated from college and was working locally to build capitol so she could achieve her goal of starting to make a living with clay within a year of graduating. She had very little experience in selling but was accustomed to the idea of being an entrepreneur due to her parents who were running successful tourist cabin rentals and power equipment businesses. Terrance had a good sales acumen from selling (aka: hustling) merchandise in NYC and other eastern metropolises. Due to his service in Vietnam, he was able to get a peddler’s license so he could essentially set up and sell anywhere. He had studied art at the Arts Student League in NY when he got out of the army and was doing pencil drawings of the Adirondacks and selling prints and originals at Prince Phillips Spring near interstate 87 exit 30 as well as other locations. He had also started doing craft shows and was supplying art/craft shops and even a few restaurants with work to hang on their walls. In the late 80’s he had even befriended a building manager at the Mirror Lake Inn and arranged for his work to be purchased and hung in the guest rooms.

For Sue, selling was much more challenging due to shyness and being more laid back. Partnership with Terry was a great way to learn the ropes. Starting out, craft shows, wholesale and consignment were the primary means of marketing. As they gained a mailing list direct mailings became an important way to stay connected to customers, so a good brochure was important. Due to the ever changing and sometimes one of a kind nature of their work, a print catalog was not practical. When they opened their first store front in 1983 the goal was to make YSG store sales the greater part of their income. Other marketing strategies that they have tried were:

1990: They did many craft shows but a standout was the annual show at the SUNY Plattsburgh field house. One year they hired students to hand out “Top 10 List of why you should visit Young’s Studio & Gallery booth”. This was a riff on David Letterman’s Top 10 Lists.
1992: Video catalogue, in the catalog they basically did a walkthrough of the store, also some still artwork and rotating pottery shots. VHS tapes and mailing was cheap in the 90’s and for the number of requests for videos they could easily make copies and edit as needed. This did not generate a lot of sales but did get them savvy about photographing and filming their work.
1995: New Gallery space opened. Multiple grand opening events during the year with a pottery bowl give a way to first 20 customers during a holiday sale.
1997-1998: ACraftGift, acraftgift.com (currently decommissioned) A website that Terry built that featured their work and work by many of the artisans that they represent with a focus on fine American craft. This is purely conjectural, but they were too early for web sales of fine crafts to be a thing people were comfortable doing. In 2005 Esty was launched to great success.
1997-1998: Comfort Inn craft show. They rented a banquet room at the Plattsburgh Comfort Inn and brought the whole store and a few other Jay products for a weekend show. First year they did very well. The second year the rental went up significantly to effect net profit and they didn’t feel it was worth continuing the effort.
2003: Opened a satellite store in Wilmington. In 2002 YSG had a banner year at the Jay store and figured the Wilmington store would bring in an extra 50% or more of that. Filled the new store with different products to eliminate redundancy. In 2003 the economy tanked, and they made the same as the year before with both stores. Decided to focus back on the Jay store and recoup their investment.
2006: Craft shows had become less profitable, and the greater part of their income was now coming from YSG store sales. They had stopped doing shows in the late 90’s. With two daughters heading into college, they were driven to bump up income. It became apparent that Farmers Markets were an economical and popular way to sell. For 8 years Sue did the Lake Placid farmers markets. Most were very good.

Other cross over marketing tools were donating to a PBS televised art auction and designing and implementing public ceramic tile art murals throughout the north country. In the mid 90’s they did an annual event call “Participation Day” where for a nominal fee to cover materials people could silk screen a tee shirt, decorate a bisque mug, and at least two other mini workshop type activities such as weaving, basket weaving, leatherworking, beading with semi-precious stones and/or paper decorating. This was a form of education/marketing to give people a chance to try to make something like what was featured in the store. About year 4 people started bringing their kids and dropping them off for the day. Not what they were envisioning so the event was discontinued.

“We also did a certain amount of more traditional marketing such as advertising in Plattsburgh, Lake Placid and other local newspapers. Advertising success was harder to see as beneficial but the most recent ad campaign for Yarns at Youngs proved successful. Feature articles in said newspapers and publications have helped keep our names in the public eye. Many of the listed marketing efforts are now obsolete due to the fast pace of social media and the internet. We do have a website and Facebook presence. I am finding both Instagram and Facebook to be very helpful especially for visitors coming to the area. One marketing tool that will always be important for us is the face-to-face connections we make with customers. We have 3rd and 4th generation families who are still customers. Occasionally someone will come in or comment on Facebook that they still have the print they bought from Terry at Prince Phillip Springs all those years ago.”